Tobacco Use Among the LGBTQ+ Community

Home/Education, Public Health/Tobacco Use Among the LGBTQ+ Community
Previous

Tobacco Use Among the LGBTQ+ Community

Tobacco usage is responsible for over 450,000 deaths in the United States each year. With cigarette smoking being the leading cause of preventable deaths and diseases in the U.S., certain populations and communities are more susceptible to these tobacco-related deaths than others. One such at-risk population for engaging in tobacco use is the LGBTQ+ community. According to a 2016 National Health Information Survey, “nearly 20% of lesbian, gay, or bisexual adults (transgender identity was not specifically recorded in this survey) reported being current cigarette smokers … LGBT young adults are nearly twice as likely to use tobacco as their non-LGBT counterparts, and over 40% of LGBT young adults are occasional cigarette smokers (FDA)”. As a result, the LGBTQ+ community is also at higher risk for health conditions related to smoking and tobacco use, such as heart disease, cancer, COPD, and diabetes.

What causes this increased risk? Recent research has identified certain psychological and environmental risk factors that contribute to this disparity. LGBTQ+ individuals experience day-to-day realities in today’s society such as internalized homophobia, stress due to societal stigma and ostracization, and negative reactions and interactions as a byproduct of disclosing their sexual identity. These factors may be associated with increased smoking and tobacco usage rates amongst the LGBTQ+ community – in fact, “overall, sexual minorities are 1.5 to 2.5 times more likely to smoke cigarettes than heterosexual individuals (Truth Initiative, 2016)”. The discrepancy between heterosexual tobacco users and homosexual tobacco users, as well as between transgender tobacco users and cisgender tobacco users, is apparent. Even amongst the youth and young adult demographics, data has shown that more gay, lesbian and bisexual youth smoke cigarettes or e-cigarettes than their heterosexual counterparts. Transgender youth use cigarettes four times more and e-cigarettes three times more than cisgender youth.

Of particular prevalence among these risk factors is the intentional influence of Big Tobacco companies and their marketing strategies. History has shown decades of marketing and advertising efforts that specifically target and hyper-focus on the LGBTQ+ population. As stated by the CDC, tobacco companies spend multiple billions each year in efforts to aggressively market their products and target specific populations, such as the LGBTQ+ population. The LGBTQ+ community falls victim to aggressive tobacco advertising and are flooded by the marketing efforts of tobacco companies. Some of these strategies include:

The trend of tobacco companies taking advantage of sexual minorities and of the LGBTQ+ market can further be seen through the 1995 marketing strategy “Project SCUM”. Otherwise known as Sub-Culture Urban Marketing, this strategy was utilized by the tobacco company R.J. Reynolds to increase cigarette sales with advertisements placed in communities and stores that were designed specifically for gay men and homeless individuals. LGBT health expert Dr. Scout of the National LGBT Cancer Network explains this pattern, saying, “we’re targeted by the tobacco industry, because we’re a very easy population to sell to, and we pay them back in decades, and decades, and decades of handsome profits to their bottom line (Truth Initiative)”. Tobacco companies both then and now use expanded and aggressive marketing trends in order to foster the initiation and continuation of tobacco use among the LGBTQ+ population.

However, these factors are all contributors to tobacco usage in the LGBTQ+ population that can be properly addressed by federal, state, and local levels of tobacco cessation efforts. The FDA and FTC (Federal Trade Commission) can restrict the use of targeted marketing strategies on specific communities, not just limited to the LGBTQ+ population. It is also important to recognize the disparities in accessing healthcare for the LGBTQ+ community, and work to alleviate these barriers moving forward. Finally, it is important to increase awareness in regards to the prevalence of smoking and smoking-related health conditions among LGBTQ+ individuals. Continuing to collect and spread accurate and up-to-date information on topics such as tobacco use rates, risk of diseases, and certain perceptions of use and history in the LGBTQ+ community are necessary steps to continue to cater to those that are disproportionately impacted by the effects of tobacco and tobacco companies within the LGBTQ+ population.

Additionally, state and local efforts to provide increased access to cessation services must be ensured. For more information on free tobacco cessation services, such as group quit sessions and tools to quit, call toll-free: 866-341-2730 or visit www.ahectobacco.com and www.srahec.org.

“Tobacco Use in the LGBT Community: A Public Health Issue” U.S. Food and Drug Administration, 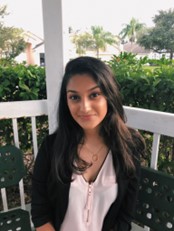 Nayana is an intern at Suwannee River AHEC. She is a third-year student at the University of Florida on the pre-medical track, and is currently pursuing a major in Behavioral Cognitive Neuroscience and a minor in Health Disparities in Society.